This page contains important information on the 2022-2023 eradication response, including critical updates to the regulated area in Vancouver.

Stay current with Japanese beetle – sign up for the weekly Japanese Beetle update!

This session includes critical updates on changes to the 2022 eradication program including movement controls, treatment, and disposal of regulated materials. All professional horticulturists working within or around the regulated areas are strongly encouraged to review this information.

Have you spotted a Japanese beetle?

If you think you have spotted a suspect Japanese beetle (Popilla japonica) or Japanese beetle feeding damage, report your findings to the Canadian Food Inspection Agency! Call 604-292-5742 or email [email protected]

For more information on reporting sightings of Japanese beetle, or what to look for, visit CFIA’s website.

Garden Centres In or Near the Regulated Areas

Visit Japanese Beetle Information for Garden Centres for important information on how  retailers can help stop the spread.

Japanese beetle (Popilla japonica) is an invasive, regulated pest under the Plant Protection Act, which feeds on the roots of turf grass and the foliage of more than 300 plant species. This pest could cause serious harm to BC’s agricultural sector and ecosystem, and could cause significant damage to food crops, lawns, landscapers, golf courses, gardens and parks.

Japanese beetle was first detected in the False Creek area of Vancouver in July 2017. Since the initial detection, the Canadian Food Inspection Agency (CFIA) has participated in a multi-partner eradication response to limit the spread of the pest into other parts of BC, to successfully eradicate its presence, and to maintain BC’s pest-free regulatory status. The response partners include:

The eradication response is entering Year Five for 2022-2023. Year Four survey detections resulted in a 64% reduction of Japanese beetles from Year Three. The overall number of beetles continues to decrease, however, 50 of the 79 beetles were detected outside of the designated Regulated Area. In response to these detections, the CFIA, with support from the above partners, has expanded the Regulated area within Vancouver and within the City of Burnaby.

A revised regulated area came into effect on March 19, 2022 and includes areas within the Cities of Burnaby and Vancouver.

This expansion is in response to the detections of Japanese beetle found outside of the regulated area in Vancouver and Burnaby and was made at the recommendation of the British Columbia Plant Protection Advisory Council (BCPPAC).

Interactive Map– type in your postal code or street address to identify whether you are in a Japanese beetle regulated area.

The CFIA is restricting the movement of soil, rooted plants with soil, and other plant material that is infested or likely to be infested with Japanese beetle out of the regulated areas. These restrictions are intended to reduce the risk of unintentional human-assisted spread of the beetle.

Until further notice, the following restrictions are in effect: 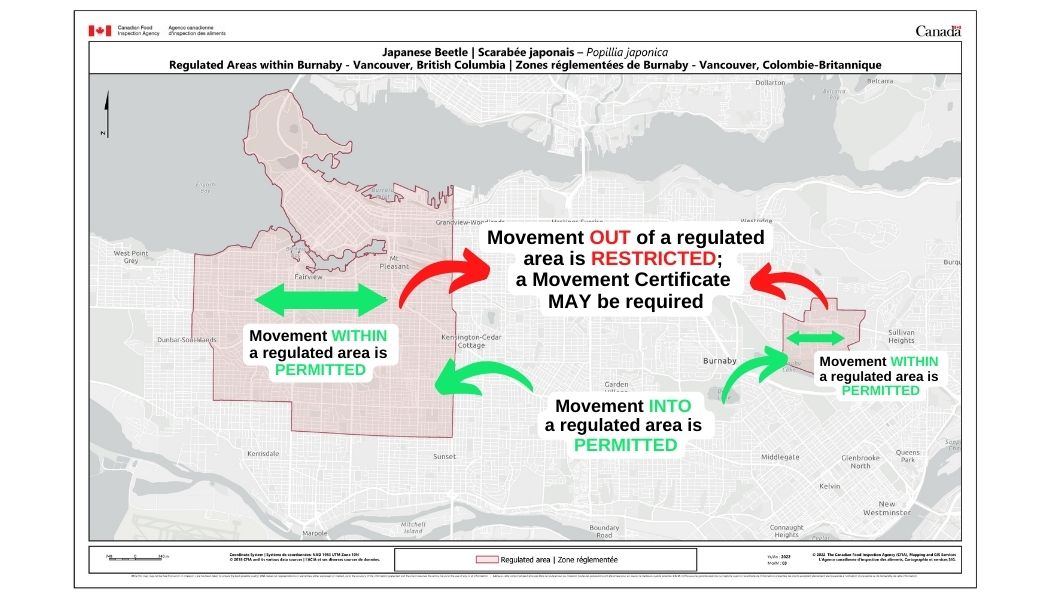 A CFIA-issued movement certificate is required to move all the regulated articles listed above outside of a regulated area.

Soil is regulated year-round and will require a CFIA-issued movement certificate to move outside of the regulated area.

CFIA Guidance for the movement of plants, plant parts and soil leaving a Japanese beetle-regulated area located within British Columbia.

Table extracted from 4.0, Movement Requirements for regulated articles leaving the regulated area, CFIA’s Guidance for the movement of plants, plant parts and soil leaving a Japanese beetle regulated area located within BC 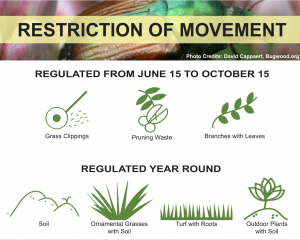 Apply for a Movement Certificate

You may be eligible for an annual multi-use movement certificate if you live or work in a regulated area, or manage multiple worksites situated within a regulated area, AND need to regularly or frequently transport regulated articles to a location outside of the same regulated area (e.g. an approved deep burial site, treatment site, transfer station, retail location or other site). Please contact the CFIA prior to beginning work, as needs will be assessed on a case-by-case basis.

Once issued, you will be provided with a list of conditions which must be met on all movements. You will also be expected to maintain a movement control log to record the movement of all regulated articles outside of a regulated area.

It is recommended to use on-site municipal green waste bins when possible. There are two transfer stations accepting regulated articles from the regulated areas:

The Temporary Transfer Station (TTS), which accepted small amounts of plant material from the False Creek regulated area in previous years, will not open in 2022.

City of Vancouver Notice of Closure of the Temporary Transfer Station

One of the enforcement options is to issue an Administrative Monetary Penalty (AMP), which is a Notice of Violation with either a warning or a penalty. Penalties for individuals can range from $500 to $1,300, and from $1,300 to $10,000 for violations committed during the course of business.

Treatment for Japanese beetle is coordinated by the Ministry of Agriculture, Food and Fisheries (MAFF). The 2022 treatment response will consist of a single larvicide treatment (Acelepryn) of turfgrass on public and private lands. Four  foliar applications of Bacillus thuringiensis subsp. galleriae (Btg), a biological insecticide will be applied to landscapes beds in areas with adult beetles through mid-summer.

The cities will coordinate treatment of public lands (city parks, boulevards, etc.) and treatment of private lands will be coordinated by the cities, licensed applicators and the Ministry.

Follow these best practices to prevent the spread of Japanese beetle: 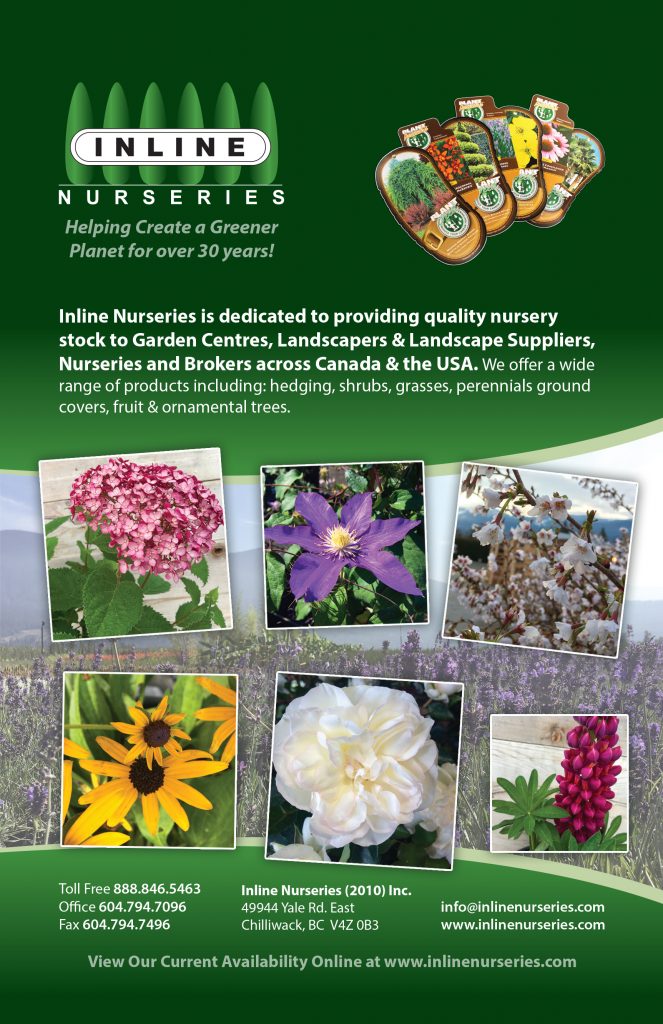 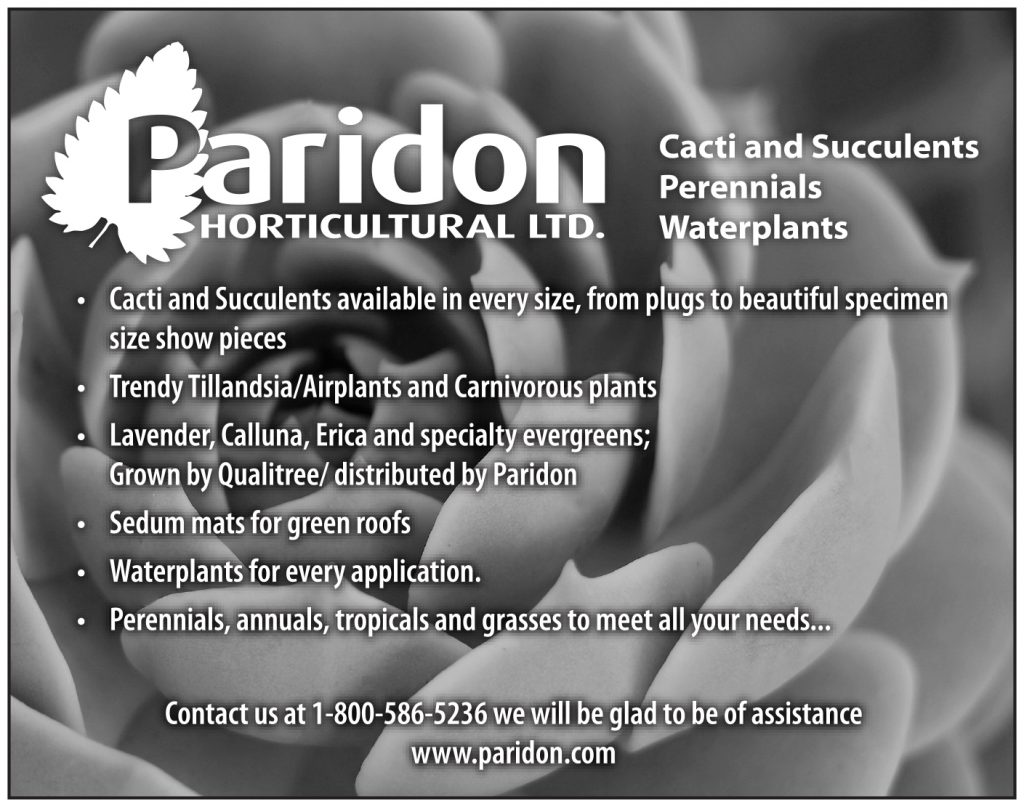